Organisations with a Pro or Plus subscription can add or invite users to make pledges to their campaigns. We recommend that adding users is among the last steps you take when creating your campaign so that you can consider it alongside your launch and communication plans.

In this user guide:


Inviting users to a campaign

Sharing a link to a campaign

Removing users from a campaign

Inviting users to a campaign

If you're an editor for an organisation's page, login and click 'manage users' in the dashboard to invite users to your campaign. Adding new users (to 'current users') increases the price of subscription according to the terms of your subscription.

Organisations on a 2-week free trial are limited to 10 users. You'll need to upgrade to remove this limit, at which point your subscription will be calculated according to the number of users. 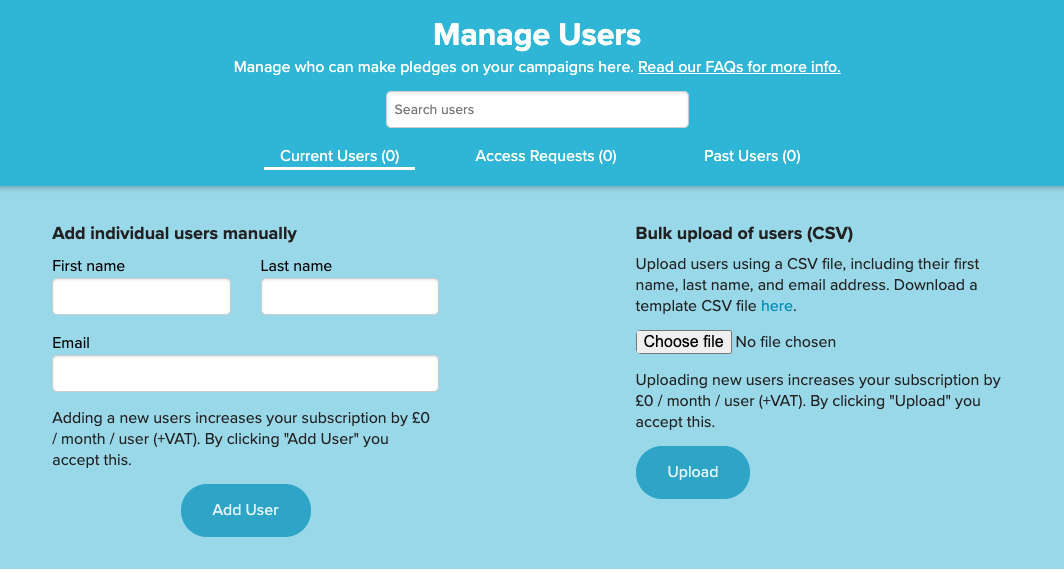 You can add individual users manually by entering their first and last name and email address. They'll receive an invitation to create an account and start pledging to your organisation's campaign.

Sharing a link to a campaign

Users who join and pledge towards a campaign via a link rather than being added directly will have control over their own privacy settings. This means that they can opt out of sharing their contact details with you, so you may be prevented from seeing who has interacted with your campaign.

If you want to share your campaign more widely, with users for whom you don't have contact details (for example via a company update or even a post), you can share a link to the campaign page. People who click the link will be invited to create an account and pledge to your campaign.

Users who want to join your campaign will appear in the 'Access Requests' tab under Managed Users, from which you'll need to click to approve their access.

Removing users from a campaign

Editors can remove users at any time, revoking their ability to pledge to your organisation's campaigns. Simply select the users you'd like to remove in the 'Current Users' tab under Managed Users and click the dustbin icon.

Any profiles will remain active and pledges they've already made will remain on your campaign. They'll still be able to confirm existing pledges once complete but they won't be able to record any new pledges to your campaigns. Your subscription will be reduced the following month accordingly.

Did this answer your question? Thanks for the feedback There was a problem submitting your feedback. Please try again later.